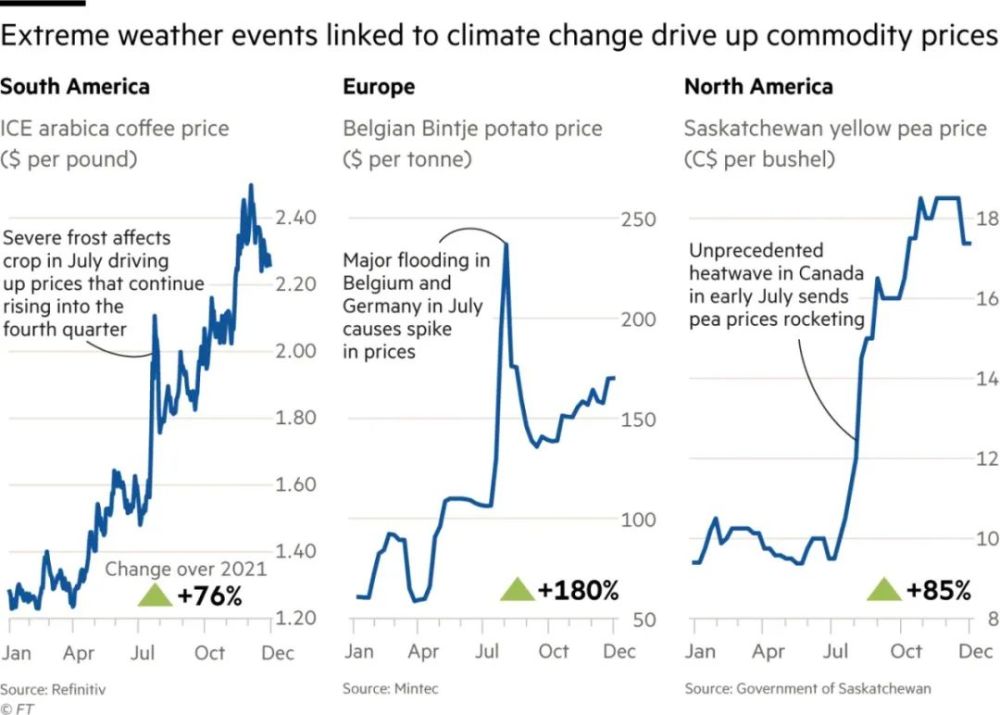 Extreme weather events in 2021 triggered spikes in the prices of agricultural commodities, which remained elevated into 2022, as the unusual conditions that damaged crops resulted in ongoing shortages.

The price of goods including Brazilian coffee, Belgian potatoes and Canadian yellow peas Ī¬ in demand as a protein substitute in plant-based foods Ī¬ rose sharply last year in response to extreme temperatures and flooding.

Scientists have warned that these conditions will become more frequent and intense as climate change accelerates.

Logistical issues and changes to consumption habits resulting from the pandemic also drove up the price of staple goods such as sugar and wheat last year.

Ī░Agriculture is one of the most exposed sectors to climate change,Ī▒ at risk from both individual extreme weather events and long-term shifts in climatic patterns, said a report by Stockholm Environment Institute. The risks were Ī░many times greaterĪ▒ than the opportunities for the sector, it said.

A succession of extreme weather events that occurred around the world during the middle of 2021 damaged a range of crops, which drove up prices.

The weather in Brazil has continued to be erratic, heightening concerns about further crop damage.

The La Ni a weather pattern developed for the second consecutive year at the end of 2021, with the phenomenon expected to intensify rainfall as well as droughts around the world.

Ī░When we know that La Nina will strike this year, we can already see the prices reacting in advance, even before the real phenomenon takes place,Ī▒ said Mario Zappacosta, a senior economist at the Food and Agriculture Organization of the United Nations.

That could have a Ī░contagious effect,Ī▒ where the price of substitute crops also rises, he added.

Meanwhile, an unprecedented heatwave and drought in Canada during the middle of 2021 hit production and sent pea prices rocketing. The price of peas more than doubled, affecting manufacturers of plant-based meat alternatives that rely on the ingredient.

The price of Belgian potatoes also surged after flooding devastated large swaths of Europe during the continentĪ»s summer.

In their report, researchers at the Stockholm Environment Institute said climate change would Ī░dramatically impact agricultural production all around the globe,Ī▒ and would reduce crop yields in certain areas.

Global sugar cane yields could fall 59 per cent in the last three decades to 2100, compared to yields in the period 1980-2010, while Arabica coffee and maize could fall 45 per cent and 27 per cent, respectively, they estimated.

Ī░This is a big gap in our planning for [climate] adaptation,Ī▒ said Magnus Benzie, one of the report authors. Lower yields and higher prices could cause food insecurity in less resilient, import-dependent countries, and also drive up costs for consumers around the world, he said.

How countries reacted to extreme events and shortages Ī¬ whether they stockpiled or imposed trade restrictions, for example Ī¬ could exacerbate crises, he added.

Concurrent crises, such as successive or simultaneous droughts, were also likely to intensify shortages, and are expected to become more common as the world warms up, said Benzie.